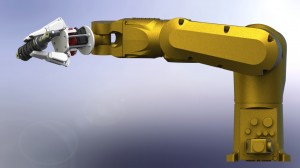 In many operations, it is desirable to exploit the force capabilities of industrial robot-manipulators by directly combining them with the skills and incomparable sensomotoric abilities of a human operator for complex assembly tasks. However, traditional robot reprogramming or switching between robot programs many times during a hybrid human-robot cooperative assembly scenario is not applicable. Therefore, efforts should be allocated to introduce more degree of autonomy and intelligence in such industrial settings such as automatic object recognition and corresponding grasping algorithm engagement. Presumably, this will lead to reduced time involvement of robot operators in reprogramming the robots during these operations.

The developed arm motion tracking system prototypes were applied for experimental evaluation of real-time teleoperation control frameworks implemented on an UR5 6-DOF industrial robot-manipulator operated from a control PC through a custom-made TCP/IP communication driver. The robot end effector followed the human operator wrist pose (position and orientation) captured using the 7-DOF arm motion tracking system in the tracker reference frame and translated to the base frame of the UR5 robot with an appropriate scaling, reflecting the user’s arm and robot link dimensions, and an offset in the z-axis direction equal to half
the length of the robot link. Initial experiments were conducted using the Phase 2 prototype for direct open-loop and various closed loop control algorithms of the robot. As a result, a new UR robot real-time explicit model predictive control (EMPC) approach was proposed that ensured smooth motion of the teleoperated manipulator, as presented in detail in [2].

The developed system prototype was used in experimental work on teleoperating a UR5 robot equipped with a Robotiq 3-finger adaptive gripper and controlled using a newly formulated nonlinear model predictive control (NMPC) system, that allowed the manipulator end effector to track the operator’s wrist pose in real-time and, while satisfying at the same time joint velocity and acceleration limits and avoiding singular configurations and workspace constraints, including obstacles. The NMPC was integrated into the Unity Engine and, afterwards in ROS, and proved to be computationally effective for realizing real-time robot control.

The 3D design models of the system module cases and module holders, created using the SolidWorks CAD software, and program code are made freely available for downloading from the lab GitHub page https://github.com/alarisnu/7dof_arm_tracker .  The simple system design released for public use can be easily reproduced and modified by robotics researchers and educators as a design platform to build custom arm tracking solutions for research and educational purposes. Please cite the below work if you utilize our arm tracker design in your academic work: